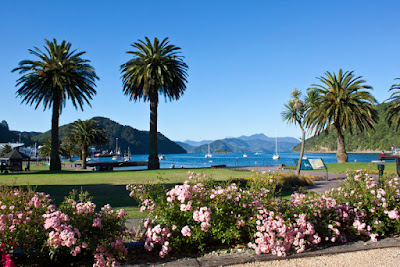 We decided to spend it on the Queen Charlotte Drive from Havelock to Picton, and take in the beauty of the Marlborough Sounds one last time. It might be a little cooler up there, and at 10AM Blenheim was well on the way to its forecasted high of over 84 degrees. Not big fans of the heat, but well aware of the weather we will be going home to, we have no complaints!

Cullen Point was our first stop and this time we did the short walk to the viewpoint. A couple of other pretty viewpoint pulloffs and we were already back in Picton. Why not revisit Motuara Island on such a stunning day? Last time it was a bit dreary. So we parked the car and arrived just in time for the afternoon cruise. Under the cloudless sky, the Sounds were absolutely brilliant and we relished this opportunity to get a last fix of blue green hues that would not be part of the Colorado landscape. 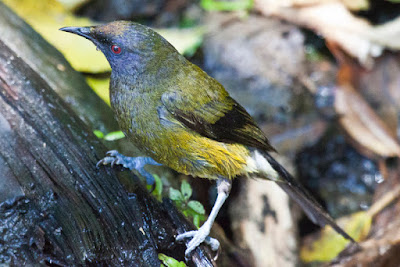 What luck! On Motuara Island our guide found a South Island Saddleback one or two minutes after we started up the trail! While most of the others in our group headed for the island's summit, we opted to spend the balance of our time at the little pool near the shore. It has been hot and dry for several days, so today the pool, the only source of water on the island, was visited by an almost steady stream of bathing bellbirds. Finally, after almost 3 months of hearing the melodious bellbirds, we had the chance to observe them at close range and get a decent photograph of them! Yellow-crowned Parakeets flew overhead and stopped by a couple of times and another Saddleback made an appearance as well.

Both to and from the island we saw many Fluttering Shearwaters and Australasian Gannets both on the water and in the air. Having just seen the gannets at Farewell Spit, it was fun to see them just sitting on the water, but even better to see them fishing -- diving straight into the water, sending up a 10 foot splash of water as they went in.

But on the way back our crew was struggling to find dolphins. Often birds are seen near the dolphins, as they take advantage of the dolphin's work "herding" the fish into tight balls. We had gone into a number of quiet little coves looking for dolphins and had already exceeded the time allotted for the trip by half an hour.  Finally we found a large pod of Dusky Dolphins -- our guide reckoned there were around 30 -- signaled by many gannets and shearwaters overhead. The dolphins were swimming by all around us and under the boat. They couldn't have been any closer without jumping on board!

As we drove back home from Picton, we both started paying more attention to some of the things we'll be seeing for the last time (on this trip). Tomorrow we start preparations to go home. It is a good thing the airlines don't charge for extra memories. We'd owe a fortune!

Click here for larger images with captions.
Posted by Susan at Wednesday, December 01, 2010