With our December 1 departure date drawing near and a fine weather window ahead, we headed out Wednesday morning towards Golden Bay and the Farewell Spit. The 3-4 hour drive included some great lookout spots, especially as we made our way over the steep and winding roads of "the hill" (Takaka Hill), although we mostly drove straight through to Collingwood.

We stayed at the Heron's Rest, a cozy B&B with views of Golden Bay from our room and the deck. We arrived to find an an envelope with our names on it taped to the front door. The note inside invited us to could come in and get settled, explaining that our hostess, Maureen, had forgotten about her hair appointment in Takaka. Maureen only knew that a couple named Mike and Susan were driving in from Blenheim -- she didn't even need a credit card to hold our room. This all seemed very normal to us, but we reflected back on how surprised we would have been to find this level of trust at the beginning of our trip.

The note further invited us to join Maureen for a glass of wine at 5:15PM, so we took advantage of the down time to take a little snooze before heading outside to the garden. Soon another couple arrived and we extended our hands greeted our British ex-pat hosts Angus and Maureen. They looked at us oddly -- we had the wrong Brits -- the couple was actually Trevor and Hilly, who were staying at the Heron's Rest Cottage next door. Maureen arrived soon enough but we didn't get to meet Angus as he was back in the UK visiting his mum. The five of us had a jolly chat before dinner. We were particularly interested in hearing about T&H's recent adventure to Antartica. (Penguins!)

Collingwood village was a handy 5 minute private bush walk from Heron's Rest and we didn't need to drive anywhere. We ate at the Collingwood Tavern, known as Tinky's by the locals, where we met up again with Trevor and Hilly and watched the sun setting over the bay through dinner in the back yard.

When we decided to drive out to Farewell Spit, the northern most area of South Island and further north than Wellington, we also had the Australasian Gannet colony in mind. Tours are not offered every day as access to the colony is tide dependent and we were glad the timing worked out for Thursday morning. Elaine was our guide for the six and a half hour tour. We boarded "Gypsy", a big red off-road bus with oversized tires to handle the changing sands. Our route was along the Collingwood-Puponga Road, past inlets with waders feeding at the tidal flats. At the entry to the gated Farewell Spit preserve area, we picked up a few more passengers and crossed through the locked gate onto the northeast facing bay. No other vehicles are allowed here, but hikers can walk out as far as the 4km marker. Now we were on pure sand and looking back toward Golden Bay and Collingwood. Mountains, dunes, beaches and ocean views surrounded us and Elaine did a great job throughout the day of turning the bus in large 360 circles so everyone could see everything. Her driving experience was evident as she skillfully avoided any soft or wet spots that might get us stuck. As we crossed the spit to the ocean side, the scenery became increasingly desolate but beautiful, with blowing sand creating a constant haze. Sea lions basking in the sun looked up at us nonchalantly as little dunes accumulated on their windward sides. From some points, it was possible to see to Separation Point which divides Golden Bay from Tasman Bay, and on especially clear days, the North Island.

Upon arriving at the Gannet Colony two and a half hours and one "comfort stop" later, we walked for about 20 minutes across a windswept sandscape, the ocean at our back, a dune ridge ahead of us filled with gannet nests, and the Golden Bay out of sight beyond the birds. About 7000 birds have been nesting here since the early 1980s, their numbers doubling in that time. The attractive birds were curious about our little group, and would often fly overhead for a look at us. DOC places restrictions on nesting bird viewing, so we had to go back to the bus after about 30 minutes. This was plenty of time to observe and get some fun photos, though as always, we could have spent far more time observing these beautiful birds and their behavior.

Our return trip included a lunch stop at a lighthouse keeper's house, a little green oasis surrounded by tall trees the workers had painstakingly planted a century ago by carrying soil back from Collingwood, saddlebag by saddlebag. We passed some of the same sea lions on the way back and also stopped to watch an Oystercatcher open and extract the good stuff out of a mussel. The last stop was to climb around on a barchan dune, one of many huge crescent shaped-shifting dunes on the spit. Hiking up was tough from the side, but we had fun running back down the steepest slope of powdery sand.

After we returned to Collingwood, Maureen met us in the garden as we hiked up the steep path from town, and recommended we head out for dinner at the Mussel Inn sooner rather than later as they could fill up. The day before she had invited us to join her for Quiz Night there later in the evening. Our fourth was Chiara, a WWOOFer from Italy who had just arrived to help out for a couple weeks. (WWOOF stands for Willing Workers On Organic Farms and is an international program that connects volunteers with opportunities to live and learn on organic properties.) The Mussel Inn is also a brewery and a Lonely Planet pick so we were happy to spend the evening. We sampled their flagship antioxidant-packed brew, Captain Cooker Manuka Beer which will soon be available in the US out of a brewery in Utah. Susan also sampled the Happy Jackal Pumpkin Ale, but we went with the Dark Horse Black Beer. Dinner was good, and Susan finished with her first Pavlova, a popular baked meringue dessert. Delicious!

After tea (dinner), Maureen and Chiara arrived just in time for Quiz Night at the restaurant, now packed with locals ready for the fortnightly competition. With team members from three countries, we hoped we had a chance, but we struggled with the 20 questions on sheets handed out to every table. This night the questions were all "who said it?" While teams deliberated on the written questions, we were asked a series of another 20 questions. In the end, we did well on the written quiz (18/20) but didn't have a chance with the oral questions, scoring only 6/20. But it was great fun and a lot of laughs. Many thanks to Maureen for inviting us to tag along! I'll also have to write and ask for the recipe for her cashew muesli (granola) -- I almost felt back home with it on her homemade yogurt for breakfast.

Friday morning we headed back out to the Farewell Spit to hike to Wharariki Beach on the West Coast. This is not just any beach, but a spectacular display of rocky outcroppings and caves that become accessible at low tide. As usual we stayed double the time we anticipated exploring, even though it was crowded. About 9 other people were also on the vast beach.

On the way home we stopped at Waikoropupu Springs, generally known simply as Pupu Springs, known for the volume and clarity of the waters flowing from its several vents. Fresh water comes from 8 different vents at the rate of 14,000 liters/second! Signage warns visitors to make no contact with the pristine water. A few minutes from the springs, we stopped for afternoon tea at the Wholemeal Cafe in Takaka and felt transported to home to Boulder in the hippie organic brightly colored surrounds. Their Carbonara, a pasta with bacon and mushroom cream sauce, is Susan's favorite New Zealand meal yet. Unless you ask for "streaky bacon", the bacon here is more like ham. On the way home again, one more side trip to see the pretty beach holiday town of Kaikerikeri, but it was quite hot, clouds were rolling in and we were pretty much beached out so we headed straight for Blenheim without taking as much as one photo, if you can believe that! 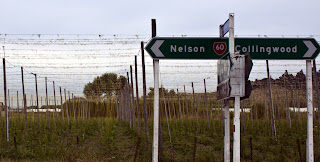 OK, well there was that one shot of hops fields outside of Motueka we took thinking of Mike's homebrew enthusiast son, Tony.
Posted by Susan at Friday, November 26, 2010